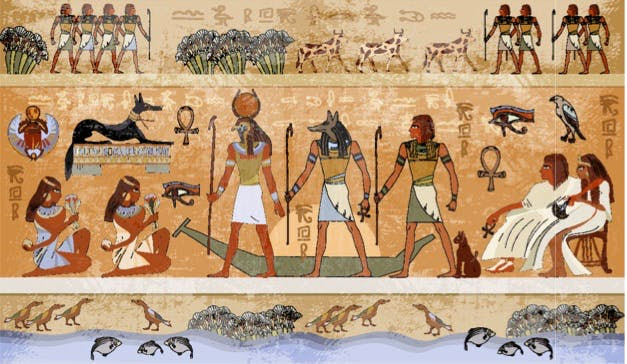 Scorching winds blow from the desert as fiery Ra, the Sun, makes his way across the sky. The sacred Scarab beetle carries the sun through the underworld after sunset and renews it every morning. You are welcome to take part in the mysterious rites of Ancient Egypt, look into the eyes of the gods that glint like gems, and obtain some great wins. This is a review of the “Wild Scarabs” video slot game by Microgaming.

The Scarab Beetle, Scarabaeus sacer, was a very important symbol in Ancient Egypt. Scarabs roll dung into balls to use it for food and lay eggs into it. Because the Sun, Ra, was represented in Egyptian iconography as a disk, the beetle pushing a ball of dung transformed into a sacred being moving the celestial sphere. This curious animal represented the god Khepri who was depicted either as a scarab or as a scarab-headed man. Every day, Khepti would renew the Sun, roll it onto the sky above the horizon, and then, after sunset, help it travel through the underworld. Scarabs were depicted on amulets, seals, and pieces of jewelry.

“Wild Scarabs” is a low-variance, five-reel, three-line video slot with 243 betways, and an RTP of 96,28%. The bets range from €0.20 to €60, and the maximum win that you can achieve is 1,733x your stake. The game is available on all devices, mobile, tablet, and desktop, and in Bitcasino you can play this game for free, in fun mode, or for Bitcoins.

The low-paying symbols are six gems. The higher-paying symbols are the sacred emblems of the ancient world: The Eye of Horus, symbol of protection, power of the pharaohs, and health; Ptah’s Sceptre, the symbol of power, life, and stability; the portrait of canine-headed god Anubis, protector of tombs, embalmer, and guide of souls; portrait of Set, the god of storms, lord of the desert.

The Wild symbol is the image of the sacred Scarab beetle made of gold and gemstones. The Scatter symbol, which is the highest-paying one in the game, is the Winged Sun, the emblem of divine and royal power.  Five Scatter symbols will reward you with 100x your bet.

The special features of this treasure-filled game are the Wild Deal feature and Stashed Wilds feature.

This feature is triggered if a Wild symbol appears in the center of the reels but does not complete a winning combination. In this case, up to four additional Wild symbols will appear.

If you manage to get three or more Scatters on the reels, the Free Spins game is launched. You now need to collect three sacred Scarab symbols so that three more Wild symbols appear to guarantee you a win.

Set against the sun-drenched, blue, green, and golden backdrop of the valley of the Nile, “Wild Scarabs” slot is very pleasant to look at, crafted with great attention to detail. The golden and enameled portraits of gods and sacred symbols are very stylish and seem to be the actual artifacts brought out into the light from the scented darkness of the pharaohs’ tombs. The music is somewhat standard “Egyptian” tune that reminds one of the “Mummy”-style adventure movies. It is not fantastic, but not irritating either.

The small number of extra features, both of them fairly simple, may not look too mouthwatering. There are no large bonuses in store, but the small-scale wins occur frequently and let you put together your own treasure hoard, bit by bit. Also, the Wild Deal feature lets you win on an otherwise non-winning spin, which is a very pleasant enhancement of the base game.

All in all, “Wild Scarabs” slot game is a simple and good-quality game, if not particularly exciting.